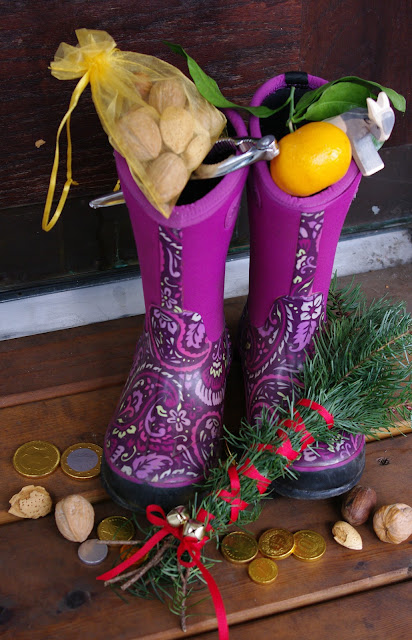 A Story for the Day of St. Nicholas...


Long ago a poor man and his three daughters lived in a little village. The man had once been rich but now had almost nothing.  He and his three daughters barely had food to eat or clothes to keep themselves warm.
Now, Nicholas was the bishop of that village. He heard about the man's family and their suffering and it made him very sad.  He wanted to help but he didn't want to call any attention to himself.  Finally, Nicholas hit upon a plan, and this was it:  One night, the poor family went off to bed as usual.  Nicholas though, didn't go to bed. He waited in his house until the middle of the night, when everyone in the village was asleep and no one would see him.  Then he made his way quietly to the poor family's house and crept up to the window, keeping out of sight. When he was sure no one was nearby, he quickly stood up and tossed into the window enough gold coins for the family to get by— and hurried back to his own house before anyone there missed him.
Well, you can imagine the family's surprise and delight in the morning when they found the gift! The man gave the coins to his eldest daughter, to help her and her sweetheart get married, which they had been wanting to do. And he thought that perhaps she and her new husband could help by sending the family some money sometimes so they would have enough to live on.
Alas! The daughter and her new husband soon had a family of their own, and moved away, and couldn't help much. Before long, the man and his remaining daughters were just as poor as they had been before.  Again, they suffered.  But again Nicholas heard of their adversity.  So once more, long after everyone had gone to bed, and everything was very still, Nicholas crept to the family's house, pitched his gift of coins through the window and ran home without anyone noticing him.
Once again the family found the gold coins in the morning with tears and joy.  And once again the man gave the coins to his daughter, the middle one this time—thinking perhaps she and her new husband could give some help to him and his remaining daughter.
But you've probably guessed what happened. The second daughter too quickly had a family of her own, moved away, and couldn't contribute anything. And so the man and his remaining daughter were again destitute.
This time, however,  the man didn't go to bed when his daughter did. He had a feeling that the bag of coins would come and this time he was going to find out how it happened. So he waited.
Sure enough, in the middle of the night, Nicholas came quietly to the house.  He saw a candle burning in the window though so instead of dropping the bag in there, he crawled up to the rooftop and dropped it down the chimney where it fell into the youngest daughters stockings which hung drying on the fireplace mantle.  The man heard the clanging of the coins in the stocking and ran out of the house.  Nicholas slid off the roof and ran but the man chased him all through the streets until they were both out of breath. He finally caught up with him. The man looked at his face and saw that it was Nicholas, the bishop! He fell to his knees, and thanked Nicholas for all he had given him.  But Nicholas did not want any credit for what he had done. He told the man not to tell anyone (although I don't think the man kept the promise, or else I would never have heard the story to tell to you.)

(Adapted from a tale at St. Nicholas Center.)