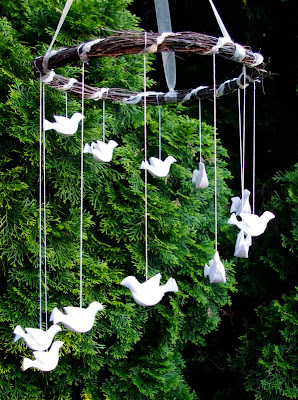 As I have mentioned in the past, I am a lover of things hanging from the ceiling.  For Whitsun this year then, I decided to make a dove mobile.  I've seen these made from paper, but since we have a collection of holiday decorations growing with each passing year, I wanted to make something more permanent that we could use again and again in honor of this observance. 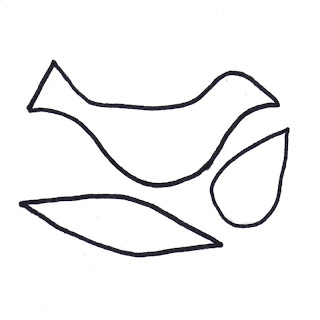 I started by scouring the internet for a simple dove pattern.  It seems like I saw these everywhere during the Christmas season but after an hour or so of searching for a basic template, I just gave up.  From looking at photographs of bird ornaments, I fiddled around and came up with this.

I'm really not sure how to pass on such a pattern.  Perhaps one could download this image and print it out?  If anyone is interested and tries that, the scale is such that the birds belly piece measures    2 1/2" from tip to tip.  ( I don't know that it will print out to scale.) 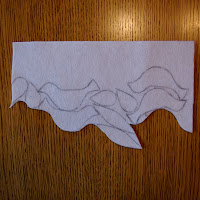 These templates were then laid onto white wool felt and traced.  For twelve doves, I cut out 24 bird body pieces, 24 wings and 12 bellies.

(I had a single piece of 9" x 18" felt and had enough left over for three additional birds.) 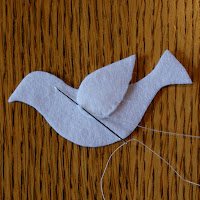 Using needle and thread, the wings were sewn onto each body piece.  (To allow the wings to spread, the pieces were not sewn all the way to the top edge.) 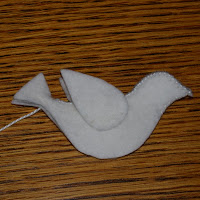 Switching to embroidery floss, the two body pieces were laid together and connected beginning just at the neck of the bird using a whipstitch.  From the neck, I stitched forward to the beak, over the head and down the back until reaching the narrowest point of the tail.

I then sewed a couple of running stitches across that tail to the bottom of the bird.  The tail was then pulled taut to sort of gather it together from top to bottom.  (It's small, so the gathering is minimal.) 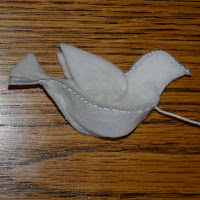 Bringing in the belly piece, I then began whipstitching one side of the belly fabric to the body of the bird. 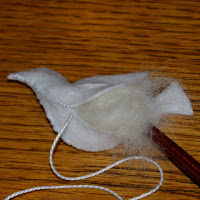 The point of the belly should end just about where the embroidery stitching at the neck began.  (When it didn't, I either cut the fabric if it was too long or stitched up the difference in the body pieces if it was too short.)


I then turned the bird and began to sew the other side of the belly onto the other half of the bird.

When about an inch of open seam remained, I used a chopstick to stuff the dove with wool.  (Any stuffing material one has on hand would do.) 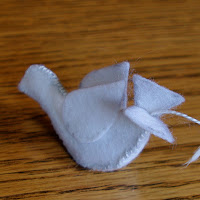 To hide the tie off knot, I pulled the last bit of thread through the tail and knotted it there before cutting. 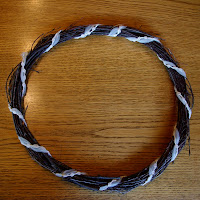 With all the birds complete, I moved on to the wreath.  Lots of craft stores carry pre-made wreaths or they can be simply made from various materials.  This one was from some kind of willow twigs I collected last year on a walk around our neighborhood.  They were long and supple stems that easily bent without breaking.  They're held together with lace ribbon I had left over from my wedding. 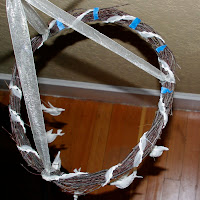 After measuring out thirds and hanging the wreath from three more ribbons (just over a foot long each) that were pulled together and knotted at the top, I stuck twelve evenly spaced tape markers around the circlet as a guide for where to hang the birds. 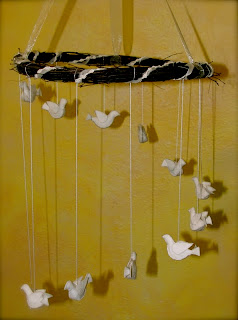 Each bird then had a bit of embroidery floss sewn just between the wings.  The first was tied onto the wreath hanging below only about an inch or two of floss.  Each successive bird was then hung about an inch below the previous until all twelve fluttered in a spiral as though descending to the earth...